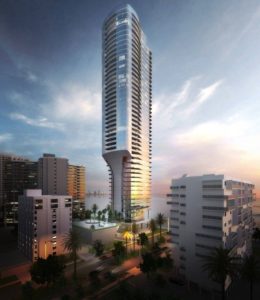 Miami-Area Developers Use Condominium Terminations to Deal With Land Shortage

Modest or shabby condominiums in downtown Miami and across the surrounding region are proving to be ripe for redevelopment as builders try to cope with South Florida’s land shortage. The builders are using so-called condo terminations, also known as de-conversions, to acquire a majority of the units in older buildings so they can transform the structures into new projects, lawyers and brokers say.

In many cases, the buildings will come down, and new luxury condo towers will rise in their place. Sometimes, the developers will renovate the properties and turn them into rentals, which are more in demand than condos in the current market. “Basically, it gives you the ability to recycle the land,” said Peter Zalewski, principal of Condo Vultures, a Miami-based brokerage and consulting firm. That’s necessary in a high-growth metropolitan area wedged between the Atlantic Ocean and the Florida Everglades.

“Almost every square inch has been bought and developed along the ocean, at least,” said Chuck Brecker, a Miami real estate lawyer who handles condo terminations. “Thirty years ago, you couldn’t give away property on Miami Beach. That world has obviously changed remarkably.” The Miami-based OKO Group is planning luxury condos at 175 SE 25th Rd. in downtown Miami after acquiring 61 units in the existing 47-year-old complex near Brickell Avenue two years ago for $48 million. The plan is to replace the building with Una Residences, 137 condos in a 47-story tower that would be ready in a few years, in time for the next condo-buying binge.

In Sunny Isles Beach, a high-end Miami suburb on a barrier island, at least 30 percent of the new residential buildings were condo terminations, Zalewski estimates. In neighboring Broward County, one of Brecker’s clients – the Embassy Group of Airmont, New York – acquired all 291 units of a condo in the northwestern Fort Lauderdale suburb of Tamarac, Florida, and renovated the dated complex into the 72 West Apartments. The one- and two-bedroom units rent for an average of $1,357 a month, and the community is more than 93 percent occupied, according to CoStar data.

In 2007, Florida legislators made substantial changes to the longstanding law governing condo terminations, Brecker said. Previously, developers needed 100 percent of the condo residents to agree to a termination, unless a building’s governing documents allowed for a lower percentage. Now the law requires developers to get at least 80 percent approval, but 5 percent of the residents can block it, Brecker said. Although developers no longer need unanimous approval, the current law gives too much leverage to minority owners to kill a deal, Brecker said. “That, to me, is unfair,” he said. Gerard Yetming, a broker for Colliers International in South Florida who represented OKO Group in its Miami deal, said terminations can be lucrative. That’s why developers pursue them, even though persuading enough individual owners to sell is a tedious, often-frustrating process, he added.“It’s extremely difficult to do,” Yetming said. “The probability of success is quite low. A lot of stars have to align for it to work.”

Opponents of condo terminations tend to portray the ventures as money grabs by wealthy developers taking advantage of residents, some of them elderly, Brecker noted. But he pointed out that developers may pay more than the units are worth, and the terminations help beautify tired or rundown areas, restoring values of nearby properties. “It’s actually the cities themselves that are begging for this to occur,” Brecker said. “This is part of the gentrification of neighborhoods. Miami didn’t become a 24/7, first-class city until the market became flooded with new residences.”